The Grasshopper and the Ant

My husband Don and I read a lot, but we don’t read the same books often. Our tastes overlap on occasion, but we read parallel more than perpendicular.

Don doesn’t have a reading agenda that requires reading for anyone’s motives but his own. His job doesn’t require him to read certain text and he doesn’t feel the need to impress anyone with what he’s reading.

OK, that’s not completely true. He reads for me, sometimes. Every once in a while, I find an author or a book that I want to share with another reader, and I know that Don’s the best choice. Don is not a teacher or a librarian, but he likes to keep up on what’s good in the book world. He knows that young adult literature has some of the best writing around these days.

Don only reads a few children’s or young adult books each year, which makes me careful about what I recommend to him. Recognizing that he reads YA selectively, I don’t waste his time. Last year, I threw him Eleanor & Park by Rainbow Rowell and Daniel Kraus’s Scowler.  The year before, Don and I shared John Green’s The Fault in Our Stars and The Raven Boys by Maggie Stiefvater.

You could probably guess my favorites each year by identifying the five or six YA books that Don reads. Call it The Best in Disturbing YA. Looking back through Goodreads at 2012 reveals an ongoing pattern of dark, trippy titles swapped between us. Don read Patrick Ness’s A Monster Calls, Stupid Fast by Geoff Herbach, and Libba Bray’s Beauty Queens. Talking with him tonight, I asked, “Did you read Everybody Sees the Ants?”

Don squinted, “I don’t thinks so.”

I gasped, “What? I have wronged you if I haven’t introduced you to Amy King. We have to fix that.”

Don said, “I did read Scorpio Races that year, though.”

“Yeah, but you didn’t like it,” I reminded him, “You said it was too horsey.”

Don said, “I totally saw what you loved in it, but it wasn’t for me. I wasn’t a big fan of Misty of Chincoteague, either.”

Every once in a while, Don reads a promising YA book before I do. He reminds me occasionally that he was the first one to finish The Knife of Never Letting Go by Patrick Ness. Last week, a copy of Andrew Smith’s Grasshopper Jungle arrived at our house. There’s lots of buzz about this book and I know Andrew Smith is an intriguing, talented writer. Don and I chatted about the book when it arrived, but I couldn’t get to it right away because I was reading a few other things.

Don took Grasshopper Jungle and burned through it in three days. He’s been raving about it around the house and on Facebook. I haven’t seen him this jazzed about a book since E & P last fall.

I find it interesting that Don and I have a separate fondness for Andrew Smith’s work without sharing a single book in common. Don read Stick. I read Winger. We both abandoned The Marbury Lens (sorry, Andrew) because we found it too strange—even by our high-tolerance standards.  We made a pact to reread it soon.

But I am reading Grasshopper Jungle this weekend. You should probably read it soon, too.

I am actually a little frightened, but that’s what Andrew Smith’s books do to readers.

Don expressed interest in reading and rereading all of Andrew’s books now, but I urged him to take his time, “Look, I have met Andrew and he’s a nice, well-adjusted guy, but even Andrew spread out his experiences writing those books. His books are weird—they bend your brain. When you know that every book is going to affect you like that, you should probably space them out.”

Don, “How about Everybody Sees the Ants?”

I laughed, “Yeah, that’s going to bend your brain, too. In all the best ways, of course.” 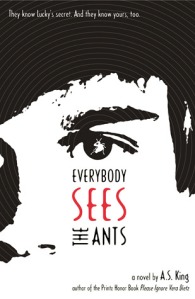 This entry was posted in non reviews, reading life. Bookmark the permalink.

One response to “The Grasshopper and the Ant”